What is wheatgrass juice? It is a juice that is extracted from sprouted winter wheatberries. The berry is sprouted and grown 6 inches before cutting because this is where the nutritional value is at its fullest potential.

Due to its fibrous nature, which is indigestible by humans, wheatgrass must be liquefied before it can be consumed. 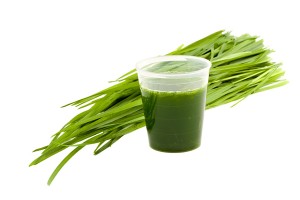 A live food, wheatgrass feeds oxygen to your body. The wheatberry is packed with nutrients including minerals, amino acids, and most importantly, chlorophyll. Wheatgrass contains 92 of the 102 minerals found in soil along with elements of calcium, phosphorous, magnesium, sodium, and potassium. It is naturally rich in Vitamin C and B-both of which build the immune system and enhance healthy skin and teeth.

Wheatgrass is also a complete protein with about 30 enzymes and approximately 70% crude chlorophyll.

This nutrient rich grass contains 17 amino acids, which are “building blocks” of proteins. Our bodies use these amino acids to build muscle tissue, repair cells, and clot the blood. However, it is the chlorophyll in wheatgrass that is perhaps its most valuable asset. Chlorophyll has been shown in studies to have a cleansing, detoxifying, and healing effect on the body.

There are other benefits to be found in wheat grass besides vitamins, minerals, and amino acids. these include:

The vital components of wheat grass are so highly concentrated that it is estimated that one ounce of wheat grass has the same nutritional value as 2.5 pounds of garden vegetables.

One ounce of Wheat Grass Juice contains the following: